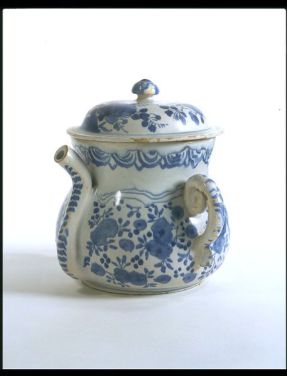 While not a collector of posset pots they certainly fall under the umbrella of ceramic feeders.

Posset pots are spouted two handled vessels from the 17th and 18th Century used to consume "posset', a beverage containing a cocktail mixture of curdled hot milk or beaten eggs, often including wine or ale, often spiced or sweetened, and often thickened with oatmeal or bread. They have lids to keep the contents warm with the floating custard portion eaten from the top with a spoon and the liquid lower portion sucked from the spout. They were most commonly made in slipware and delftware and a rare few in silver. Over time the shape of posset pots evolved from simple basic forms to more curvilinear vessels with elaborate ornamentation (too nice to use in my opinion). Needless to say it does not take much imagination to understand why most did not survive undamaged (i.e., wine, ale and ceramics are never a great combination). 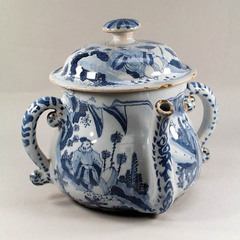 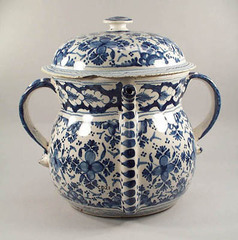 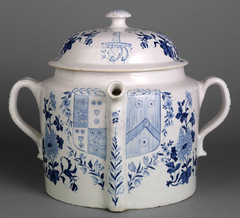 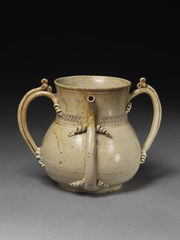 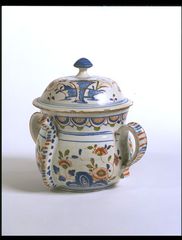 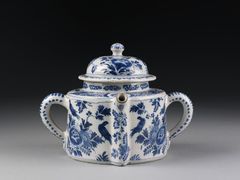 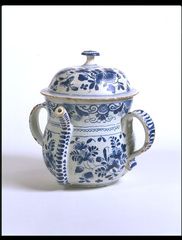 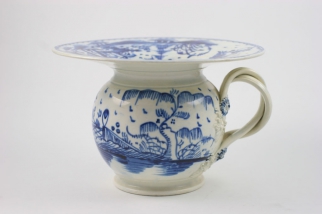 One area outside the umbrella of ceramic feeders that I also began collecting was transfer-printed ladies spittoons.

I acquired one very early on believing it was a feeding cup as described)(i.e., it had a handle, a spout, was small, etc.) and upon realization what it was paid little to no attention to it for the longest time.

It was not until much later when downsizing my collection and deciding what to keep vs sell that I decided to acquire a second to display next side it and see what I thought. Obviously we know the answer and I became hooked. 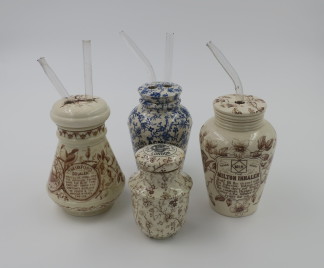 Another area outside the umbrella of ceramic feeders that I developed an interest in was transfer-printed inhalers.

While admittedly the vast majority are generic, plain, uninspiring and large there are some that are smaller, with matching lids and beautifully transfer-printed scenes of flora and birds.

With still no real sense on how they work (laziness on my part given most have directions printed on them) they display wonderfully with all the other medical related ceramics I collected. 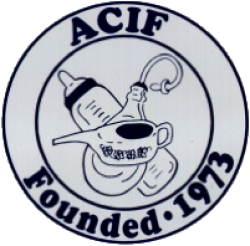 The American Collectors of Infant Feeders (ACIF) is a small non-profit organization that typically holds an annual convention (generally in late summer) hosted by one or more of its members and publishes an informal quarterly newsletter to its membership.

The organization's stated purposes are the sharing of information and the promotion of collecting. For those interested in learning more its website is:   www.acif.org.

Nothing on this website is to be taken as 100% absolute. Information shared by me is simply what I've come to understand and/or appreciate when collecting.

On that same note all images on this website shared by me are done so with educational intent in mind and thus free to use and/or copy without permission from me as far as I am concerned.

For those interested in reaching me please email:   thefeederguy@pobox.com.